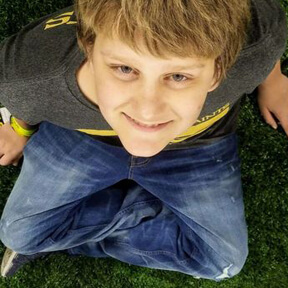 The Allen DeDon Osteosarcoma Research Fund is in honor and memory of Allen. MIB Agents everywhere worked on and contributed to MIB MISSION: ALLEN. His mission was to travel to the mountains of North Carolina to go White Water Rafting with his family. As is the Agent way, Agents everywhere delivered an experience that exceeded his expectations. Allen DeDon passed from this life on July 18, 2018, shortly after his MISSION was accomplished.

From Allen’s Family:Allen was amazing, he was a fighter and had a spirit for adventure, no tree was ever too high for Allen to climb and he loved playing sports. Allen fought osteosarcoma for 2 years and never once stopped smiling or joking and his favorite person to pick on was his mom, who he regularly made jokes about. He enjoyed building things with his dad and no one could ever tell what the final result would be until it’s finished. Allen had a light so bright everyone saw it when they met him and he was determined to make a difference in the world around him and in the lives of other children who are fighting the same fight he fought. One day no child will ever suffer because of Allen.