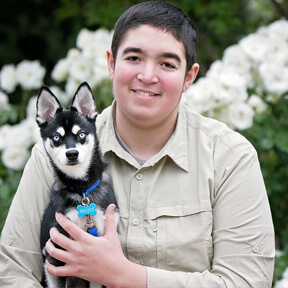 From Mason’s Mother: I think a memory that will stand out forever in our minds is that mere minutes after hearing from doctors that they fear Mason may have cancer (our whole family was in the hospital room shocked to the core), he responded that he didn’t think he had cancer, but if he did, he was glad it was not us the parents or his little brothers or sisters. At that moment, I learned the heart of my firstborn son & the unconditional love he had for his family. I told him he is more valuable to us as he is our precious child & any parent would trade places without hesitation to spare their beloved child from any pain or suffering.

He loved being a big brother more than anything. The leader they all looked up to. He enjoyed eating delicious foods, anything to do with cars, going out with his best friends, playing video games to connect with buddies, pro sports(Giants, Warriors, 49ers) & Little League baseball, rare pets like his Sphynx cats & Alaskan Klee Kai dogs who brought him such joy. He was always comfortable in knowing who he was & never felt like he had to be like anyone else. He had wisdom, courage & hope that never disappeared even when osteosarcoma relentlessly progressed over & over again. The photo above is our most favorite, not because one could not tell he was sitting in his electric scooter, that he had an above the right knee amputation, or that his operated on right lung only had 60% capacity & an inoperable tumor growing inside it again & further disease progression throughout his body; but that throughout all of his journey with cancer, Mason kept a smile on his face & hope in his heart for a cure. “I’ll try whatever it takes until it works.” -Mason

He is forever remembered by his family & friends. By our local Danville community, his San Ramon Valley Wolves(his HS) & by the Well Dressed Wolfpack that number in the thousands who prayed and lifted our family up in so many countless ways.