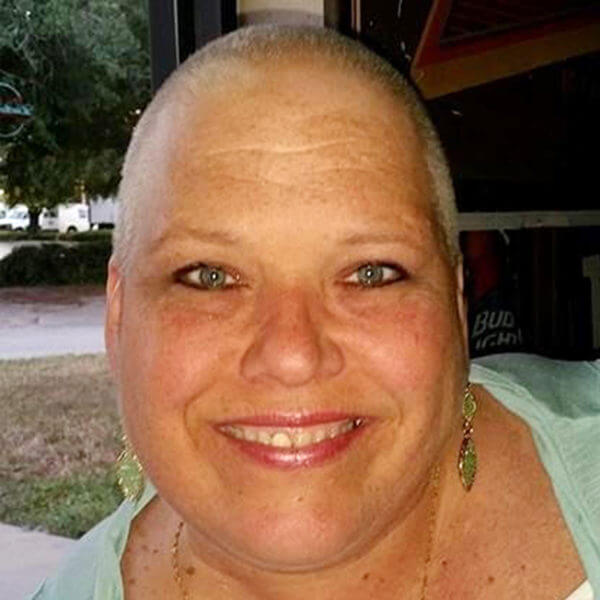 My Story: In November 2012 at the age of 47, I was diagnosed with osteosarcoma in my right tibia. Osteosarcoma is an aggressive bone cancer. It usually occurs in children and young adults. There have been no new treatments in over 40 years.

First-line treatment for osteosarcoma is to remove the affected bone. After three rounds of chemotherapy, I had Limb Salvage Surgery in February 2013. When my skin had healed enough, I was back on a highly toxic regiment of high-dose chemotherapy. A year after completing chemo, the cancer had metastasized to many of my bones. Since there are no new therapies for this type of cancer, we have tried radiation to reduce the tumor burden and pain. The cancer is now on just about every vertebrae and is compressing on my spinal cord. I’ve been blessed though because usually, osteosarcoma goes to the lungs, and after 5 1/2 years I’ve had bone only.

So I feel very lucky I’ve lived this long. The doctors were amazed that my disease stayed in my bones and did not reach my lung until recently. The cancer has spread to the pleural lining of my right lung. At this point, hospice has taken over but I’m still fighting.

Why MIB Agents: I have met so many who have helped me over the past 5 1/2 years, many of whom are still fighting, like me. There have also been far too many who have passed. My husband, I went to the first osteosarcoma conference in Coral Gables, put on by MIB Agents. We both learned so much and it was there that I met the best doctors and had all my questions answered. We also met Ann Graham, an osteosarcoma survivor, who founded MIB Agents to help kids and families who have osteosarcoma. Ann and I were both diagnosed as adults with this typically pediatric cancer. We have stayed in contact ever since.

MIB provides direct patient support, plans and executes the annual osteosarcoma conference and funds meaningful research. So it’s my honor to help raise funds towards this 501(c)(3) non-profit, with a fund they named in my honor, The Sharon Roloff Osteosarcoma Fund.