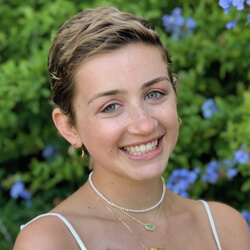 Charlotte was a senior in high school when she became an OsteoAngel. She was diagnosed with osteosarcoma in her right femur in July 2018. She began chemotherapy on her 15th birthday, and endured 9 months of chemotherapy plus limb-salvage surgery. After being in remission for 9 months, Char had two thoracotomy surgeries to remove a few nodules from her lungs.

Over the next few years, she faced several different chemotherapy regimens, radiation and immunotherapy treatment for relapsed osteosarcoma. Charlotte participated in a car t clinical trial, tried an investigative drug and had a pleurectomy surgery. If there was a treatment that could have benefitted Charlotte, she wanted it.

During the last 3+ years, she demonstrated remarkable courage and strength. Char was athletic, funny, stubborn, creative, full of grit and a sweet friend to all. Her smile lit up any room. She loved her family, friends, fashion, cooking, sports, the beach, anything cozy and her dog, Cody. "That's Sew Char" was a sewing business she started to donate funds to osteosarcoma research at UCSF and MIB Agents. Char greatly enjoyed her junior board position with MIB and her peers whom she met from this wonderful organization. Charlotte became an angel in heaven on September 22, 2021.