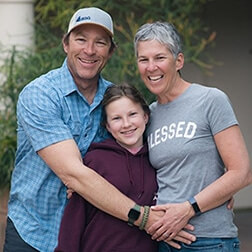 Keely was diagnosed with Osteosarcoma in her proximal left tibia in early August 2018. She began chemo (MAP) almost immediately. Given only one choice for surgery (limb-salvage) by Rady Children’s, we traveled to UC Davis for a rotationplasty with Dr. Lor Randall. Her surgery was Nov 1, 2018. Complications ensued, and she did not restart chemo until mid-December – while at Davis. Ultimately, back at Rady, she lost her RP in March due to complications with Pseudomonas and is now an AKA. She wrapped up chemo in June ’19 and has tested NED since then. She is on a prosthetic and has a service dog named Wookie.

Mike and Lynda Hess are the co-founders of Mike Hess Brewing and we encourage all our fans and friends to support this fund, as well as the other amazing foundations we are involved with as a family and as a business. We thank you so much – more than can be expressed in this short note. Cheers to better treatments, drug regiments and research that leads to a cure.