Osteosarcoma: From Our Family to Yours

This book and our resources are meant to aid you on this journey - we are not doctors or medical professionals. Your medical team should always be your first point of contact for everything medical. However, our resources are here to Make It Better. 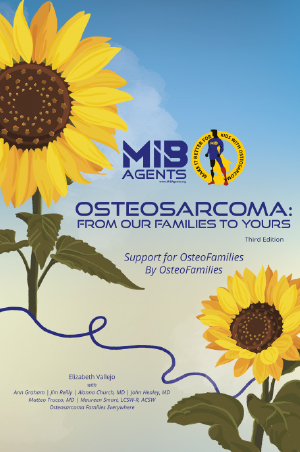 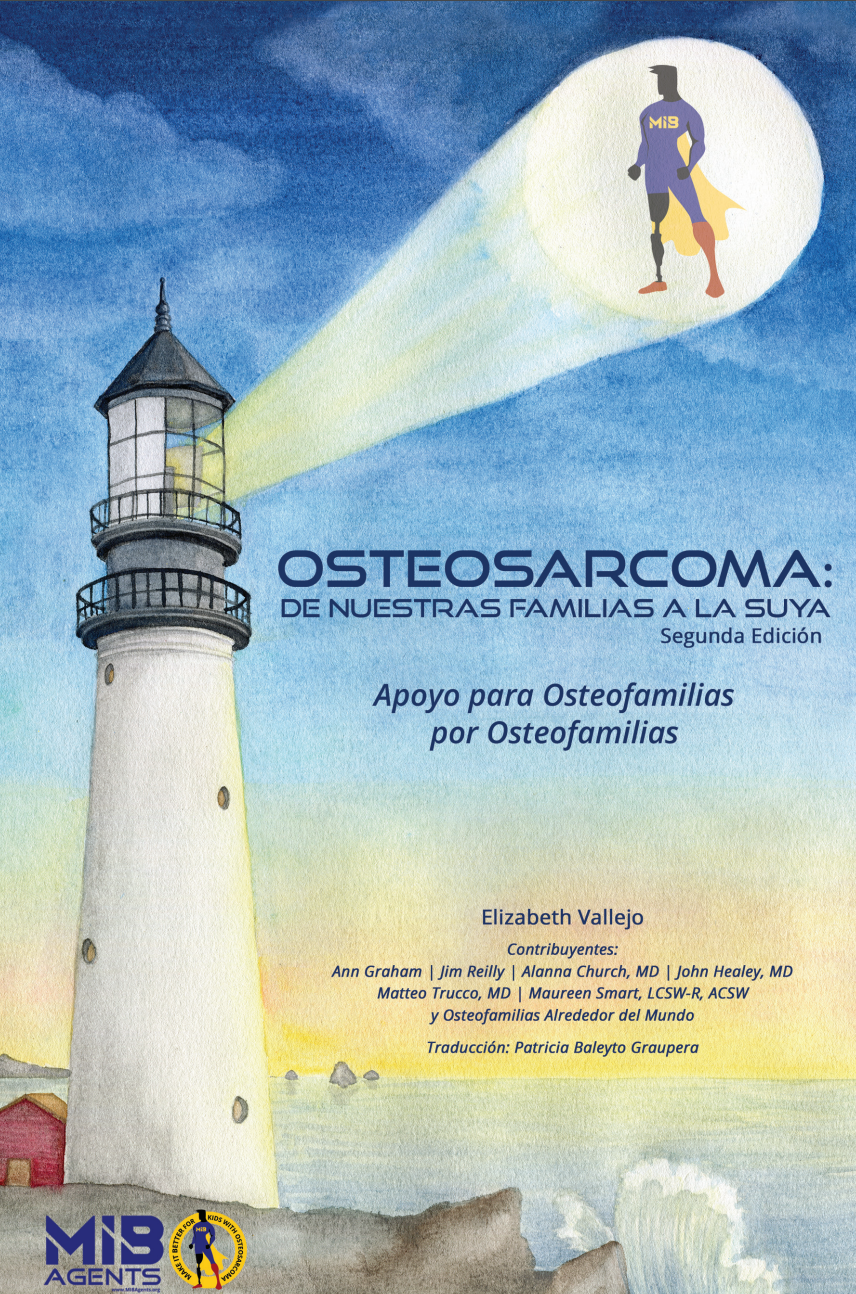 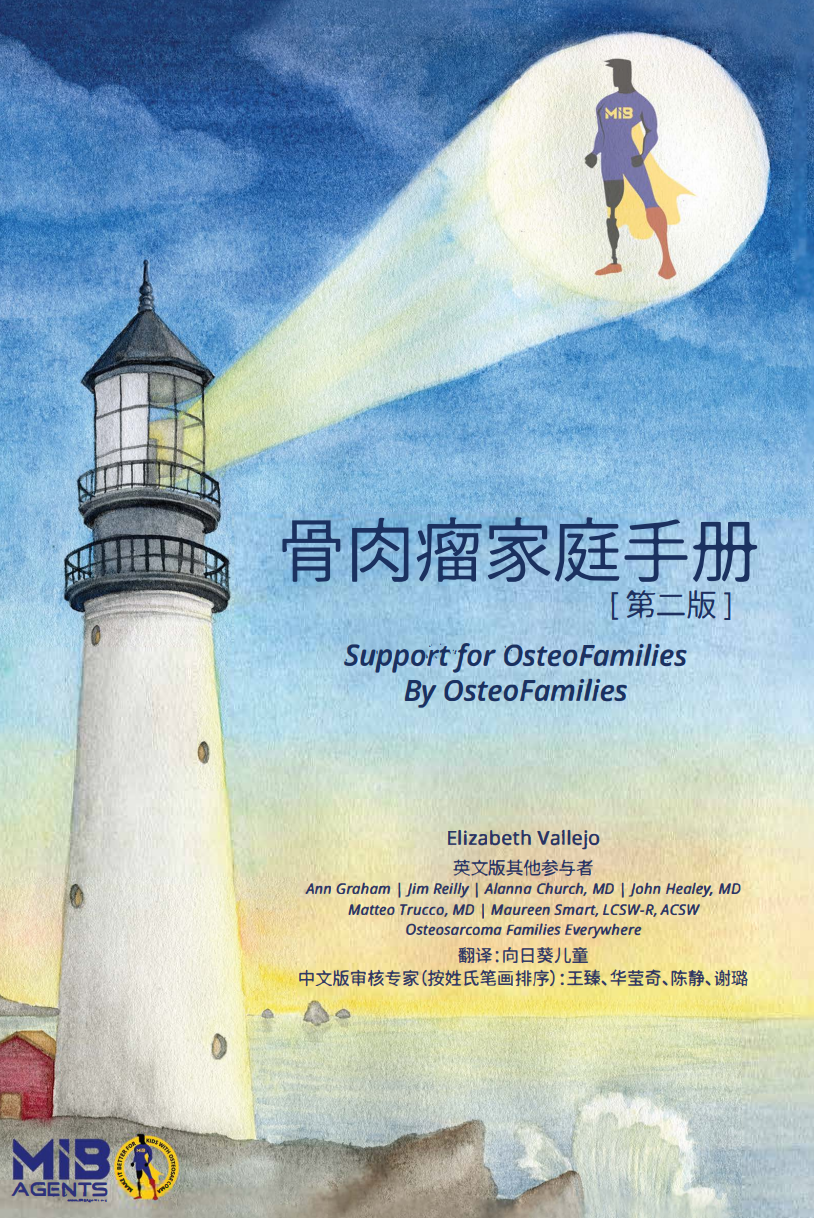 OSI Connect is free resource dedicated to supporting those impacted by osteosarcoma. This unique resource connects patients, families, and caregivers with knowledgeable osteosarcoma expert physicians to answer questions about all aspects of the disease. 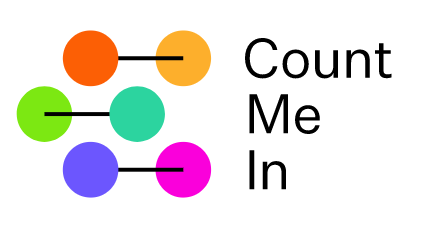 Count Me In projects partner researchers directly with patients who share their samples and clinical information in order to speed important discoveries.

Locate a Sarcoma specialist at SARC Centers across the United States.

The Compassionate Use Navigator is a one-stop resource for navigating the process of applying for investigational drugs.

Methotrexate: What to expect

ANC
ANC stands for Absolute Neutrophil Count. Neutrophils are a type of white blood cell that helps fight infection. ANC is part of the report from a CBC (complete blood count) test. If the ANC is too low a condition called Neutropenia exists and doctors will recommend special instructions to minimize the risk of infection while the body is in this state of low tolerance to infections.
CBC
CBC stands for Complete Blood Count and is a type of test doctors request on a patient’s blood. It provides information about the type, count and concentration of the blood’s makeup.
Hct
Hct stands for Hematocrit. Hct is the percentage of red blood cells in the blood. If this number is too low the body’s ability to move oxygen from the lungs to other parts of the body may be impacted.
Hgb
Hgb stands for Hemoglobin. Hgb is the part of red blood cells that carry oxygen from the lungs to other parts of the body and brings carbon dioxide back to the lungs.
Plts
Plts stands for Platelets. Platelets are the part of the blood associated with promoting clotting or clumping to stop bleeding when the body is injured. Treatments for osteosarcoma can lower the body’s platelet count. If the count drops too low, doctors may recommend a transfusion.
RBC
RBC stands for Red Blood Cells. RBC’s are also called erythrocytes and are the part of the blood associated with carrying oxygen throughout the body in the hemoglobin contained in the RBCs. It is typically part of the CBC Blood test ordered by doctors.
WBC
WBC stands for White Blood Cells. WBC’s are also called leukocytes and are the part of the blood associated with fighting infection. During osteosarcoma treatments, the number is reported from blood tests to determine the impact of chemotherapy on the body’s ability to fight infections

IV
IV is short for intravenous and refers to the apparatus used to deliver drugs or fluids directly into the bloodstream via a vein. IV is also used to refer specifically to the needle and tubing inserted in the arm to deliver drugs or fluid. Other devices used to provide IV therapy are PICC lines and Port-a-Caths.
PICC
PICC is short for Peripherally Inserted Central Catheter. A PICC line is a catheter surgically inserted in a central vein, typically in an arm. While it is installed under the skin, a portion of the catheter, “tail”, sticks out of the skin. The PICC line requires special care to keep it clean and sterile. The benefit of having a PICC line is reducing the stress and damage that repeated placement of IV’s can cause on the veins.
PORT
Port is short for Port-a-Cath which is an intravenous catheter device that is placed under the skin and used to give treatments like fluids, drugs, and blood product transfusions. It is also used to draw blood for tests. The Port is typically placed in the chest. The benefit of having a Port is reducing the stress and damage that repeated placement of IV’s can cause on the veins. It is also less susceptible to infections than other approaches. It appears as a bump in the skin and often compared to what a pacemaker looks like. For some chemotherapies, a port is required for the safety of the patient.
DE-PORT
De-Port is a humorous term used by many patients and their caregivers to refer to the time and procedure to remove the Port-a-Cath once treatments are complete and it is no longer needed. Similar to the celebration of the “end of chemo”, the removal of the port is a milestone to celebrate. Often a “Port Party” ensues.

BONE SCAN
Bone Scans use nuclear imaging to create a full body image of the skeletal structure and any differences in bone metabolism. The process involves an injection of the tracer and requiring a couple hours for it to be absorbed into the bone. Then the imaging is taken in a process that requires the patient to lie still on a table for about 30 or more minutes while the scanning equipment moves across the body. For osteosarcoma, bone scans are used to isolate the area of the tumor and determine if it has metastasized to any other bones in the body. In addition, it is used during follow up scans to see if any recurrence has occurred.
CT
CT or CAT scan is short for Computed Tomography and is an imaging tool used for diagnostics. It’s a computer-guided combination of many x-rays taking cross-sectional images to create a threedimensional image of organs, bones and soft tissue. For osteosarcoma chest CT’s are frequently used to see if it has metastasized to the lungs. A CT can be easily visualized by thinking about slicing into a loaf of raisin bread. Some ‘slices’ yield a raisin and some don’t. In a CT scan takes photos of slices capturing a possible tumor is analogous to slicing bread and ‘catching’ a raisin.
MRI
MRI stands for Magnetic Resonance Imaging. It is a medical imaging approach used to obtain pictures of organs and soft tissue in the body. It uses a magnetic field instead of radiation like X-rays and CT scans. For osteosarcoma, MRI’s are used in the initial diagnosis and as a pre-operative tool to determine the size and location of the tumor.
PET
PET is short for Positron Emission Tomography and is a scan that uses a tracer or die to create imaging that allows doctors to see how tissues and organs are functioning. PET scans are routinely used in the diagnosis and treatment of other cancers. In osteosarcoma, doctors may use a PET-CT but are often referred to just as a PET scan. The combination of PET and CT allows doctors to see better abnormal activity associated with cancer along with details on location and size. Many osteosarcoma patients never have a PET scan as there is some debate of the usefulness of the data and false readings.