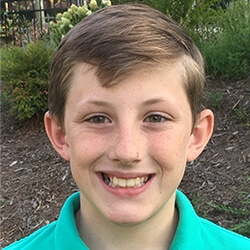 Ian was an energetic, soccer-loving 12-year-old boy in November of 2019 when he was diagnosed with osteosarcoma of the left tibia with metastatic disease. Before he even finished the 10 weeks of initial chemotherapy, repeat studies showed that his cancer was not responding to the standard treatment, which has not changed in over 30 years. He had an above-the-knee amputation at the end of January 2020 and then 2 weeks later started different chemo agents, as well as radiation to a few areas of metastases. The next studies were the first to show some improvement so we continued on the same treatment, knowing that it would not ultimately be an effective cure for his cancer. During this time Ian was able to get a prosthesis and begin practicing with it, even kicking a soccer ball again and walking on the beach. Unfortunately, it was not long before his cancer progressed, and Ian passed away on May 31, 2020. He was at home with his family before he went to his eternal home with his God and Savior.