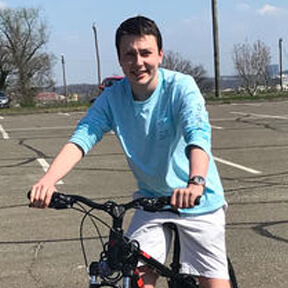 Jack was diagnosed with osteosarcoma in his left tibia in April of 2017. When the diagnosis of osteosarcoma was finally made it forever changed the life of our family.  Jack began with 3 months of chemo followed by Limb Salvage Surgery and then more chemo.  He finished the last round of brutal chemo right before Christmas of 2017 all while still having a smile on his face.

During the past 9 months of Jack’s treatment while learning more than we ever wanted to know about this beast called osteosarcoma, we were shocked to find out how underfunded research is for children’s cancers in this country.   Even more astonishing is how very little has been done in research with osteosarcoma.  To know that the protocol that these kids go through is pretty much the same as it was over 30 years ago is just astonishing.  We MUST make it better for these kids and give them a fighting chance to beat this devastating disease.  MIBAgents is the place where we think our fundraising efforts will have the biggest impact.  100% of your donation goes to actual research of finding a cure to osteosarcoma!