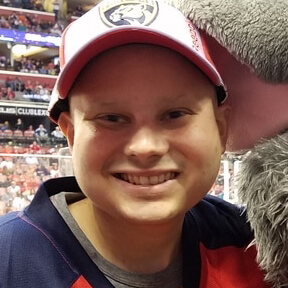 The Matthew Lehrman Osteosarcoma Research Fund began when Matthew contacted MIB Agents and asked how he could Make It Better (MIB) for osteosarcoma for patients.  He believed that we needed more research for osteosarcoma, so we set up a donation page for his friends and family who wanted to help.

The remarkable thing is that Matthew did this from his hospital bed while fighting this disease.  He believed that he could make a difference, and he has.  This summer, the funds he raised will be a part of MIB Agents’ award to the most promising initiative to improve osteosarcoma treatments, as voted on by osteosarcoma patients and a team of researchers and physicians.  As Matthew wished, 100% of every dollar raised goes directly to fund much needed research to improve outcomes for his disease.

Matthew passed from this life on May 3rd after a difficult and valiant battle with this disease.  It was his desire to continue to Make It Better for kids with osteosarcoma.  The Matthew Lehrman Osteosarcoma Research Fund will continue to help defeat osteosarcoma.

Rest In Peace MIB Agent Matthew. You have indeed Made It Better.

From Matthew:
My name is Matthew Lehrman. I was diagnosed in June, 2015 with osteosarcoma, a devastating form of bone cancer.  With the love and support of my family and friends, I fight daily to overcome this horrible illness.

Osteosarcoma has been referred to as the “orphan cancer” because it is so rare, and therefore often overlooked by the medical field. Your generosity will facilitate the desperately needed funding for research that will ultimately result in a cure for osteosarcoma. Thank you so much for contributing to this monumental goal.