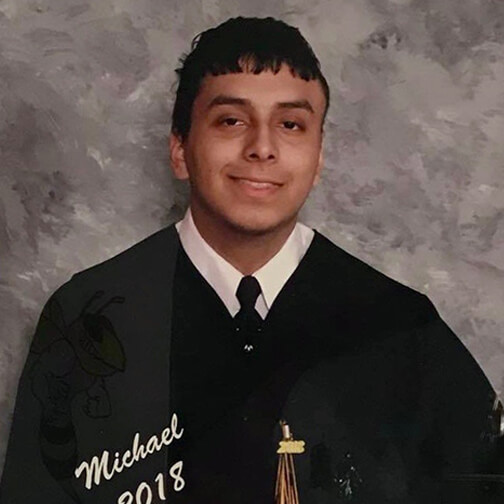 Michael Heras passed from this life on May 25, 2018.  He will always be remembered with love and admiration for his incredible courage and fortitude in battling osteosarcoma.  He knew that this fight for his life required more from him than should be asked of any person.  He faced more than 30 rounds of chemotherapy, limb salvage surgery, lung surgeries, clinical trials and amputation.  His desire to help other young adults and children with this disease will be carried on in his name.  Our desire is to carry out his hope to improve outcomes for osteosarcoma. We sincerely hope you will help us in honoring Michael’s wish.

In late December of 2015, Michael (16 years old) was at his first basketball practice for the winter season. While doing sprints, he began to favor his right leg similar to experiencing a muscle strain. During that season he rested for a few days at a time and would play on game days sparingly while still limping during the games. During the season, we sought treatment from a few doctors, attended physical therapy for what was thought to be a muscle strain. Each doctor said he displayed all the signs of a strain and to be safe even ordered an x-ray which showed no issues. Michael actually seemed to be getting better slowly with treatment and eventually played in his first full game.

Fast forward to spring break March 2016 where again he seemed to be improving and even lost his limp. While playing basketball with his friends and jogging to get a loose ball, he felt the pain once again in his right leg and began to limp again. In late March we decided to take him to San Antonio Orthopedics as his pain now seemed to be around the knee area as well. He was examined and again was told he had a muscle strain that he likely aggravated while playing with his friends during spring break. During the next 2 weeks, he missed a few days of school with some pain in his leg and we decided to request for an MRI to be performed.

In early May 2016, only a few hours after his MRI, we received a phone call from the doctor’s office asking us to please come back to the office as soon as possible. Obviously getting a call of that nature only a few hours after the MRI was very concerning so we immediately left work to meet with the doctor. Once there, we received the news that a tumor was discovered on Michael’s right femur via the MRI which left us in shock. We were promptly referred to another Orthopedist who put Michael on crutches following his examination and scheduled a biopsy of the tumor for May 11th 2016. It was on that day that we were met by the doctor immediately following surgery and learned that our only child was diagnosed with Osteosarcoma of the right femur, which was devastating news to our entire family and friends. Michael began chemotherapy on Monday May 23, 2016.

Michael Heras  passed away from an aggressive primary bone cancer called osteosarcoma.  There have been no new treatments for this pediatric cancer in over 40 years.  This lack of new treatments left Michael and other kids with this diagnosis with extremely harsh chemotherapies given in combination for nearly a year, in additional to long hospital stays, removal of cancerous bone/limb and likely lung surgery as well. Once the first-line therapy fails, there are only clinical trials available – all of which have failed to this point.

We have to do better for kids and young adults like Michael.  Please help us Make It Better.  Every dollar donated for research goes as a whole dollar for osteosarcoma specific research, which we will help select along with MIB Agents Scientific Advisory Team.

Please donate on behalf of Michael, so that we can make it easier for our kids fighting so hard.