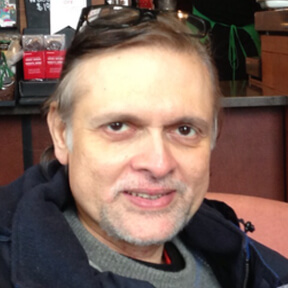 Noblesse oblige is a French phrase literally meaning “nobility obligates”. It denotes the concept that nobility extends beyond mere entitlements and requires the person who holds such status to fulfill social responsibilities, particularly in leadership roles.

Throughout his life of service and his commitment and care of this osteosarcoma community, he demonstrated vision, fortitude and an unwavering loyalty to Making It Better.  He made sure this conference happened knowing that what good may come of it would likely not benefit him directly.  He is, and always will be an MIB Agent of the Highest Order.

Mohan’s legacy in service to those suffering with osteosarcoma will continue with the Mohan Anand Osteosarcoma Fund.  Donations made to this fund will go directly to fund direct patient support and osteosarcoma research.

Commander Mohan N Anand, PMP was an Indian Navy veteran of 20 years. He subsequently worked as a project manager in India, USA and Canada.

In the Navy, he was a specialist in navigation and operations. He served afloat for 13 years in different types of ships including amphibious ships, frigates, destroyers and aircraft carriers. He held key assignments at Naval Headquarters as commander of the naval war room, in planning operations and in naval intelligence. He was involved in setting up and managing anti-piracy operations in the Indian Ocean region, including in the waters off Somalia. He played a key role in the capture of a Japanese merchant ship, MV Alondra Rainbow, in the Arabian Sea, that was hijacked by pirates. He has coordinated disaster relief in major natural disasters; 1999 super hurricane off the East coast of India, 2000 earthquake on the west coast of India. He attended a year-long Naval course in Jakarta, Indonesia.

As a young Lieutenant, from 1988-90, he was ADC [Aide-de-Camp] to the President of India. He accompanied and helped conduct the itinerary of the President in India and overseas. He also served as liaison officer to visiting heads of state like Mikhail Gorbachev [USSR], Francois Mitterand [France], Bob Hawke [ Australia], the King of Bhutan and the late PLO Chairman Yasser Arafat.

Post naval career, he was part of the leadership team of a top accounting software company in Bangalore, India, Tally Solutions. He headed the HR, project management and corporate planning departments for 3 years. Subsequently, in 2007, he moved to the US with his family, where he worked as an IT project manager in Troy, MI, San Francisco and Seattle for companies like Delta Dental and Microsoft. He was a resident of Vancouver, Canada.

During his post Naval career, he faced some health challenges. In 2005, he was treated with radiation and R-CHOP chemotherapy for a stage 4, Non-Hodgkin’s Lymphoma of the bone, which was under remission. In 2013 he was diagnosed with a radiation induced high grade osteosarcoma on his left shoulder. He was treated with chemotherapy and limb salvage surgery.  In mid-2014 bilateral lung metastases were detected.  To combat these metastases, he had been on different treatment regimens like SBRT [Cyberknife], Sorafenib, Afinitor, Gemcitabine and an immunotherapy clinical trial with Keytruda, and finally, Pazopanib.

Mohan was an avid tennis player and also loved to sail, play golf and run. He has a 24 year old son who is a mechanical engineer from UBC and works at Calgary, AB.

Commander Mohan N Anand was an Indian Navy veteran who had successfully fought off a Stage 4 Bone Lymphoma in 2005. Unfortunately the radiation given in 2005 caused a bone cancer or osteosarcoma in 2013.  Mohan had fought mightily, trying all kinds of standard and trial treatments, including implant surgery, with limited success.

The disease continued to grow and posed a considerable challenge to his work with MIB Agents.

Your monetary contribution will be utilized very wisely and appropriately directly in support of osteosarcoma research initiatives to improve outcomes for current and future osteosarcoma patients.

Please do contribute for such a noble cause.  Your contribution is deeply valued and appreciated.  Thank you!