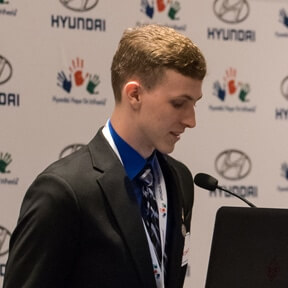 Ryan was diagnosed with osteosarcoma in his hip joint on Sept 2014 at 17 years old in his Senior Year of High School. He completed treatment in July 2015 and relapsed in January 2016 to his lung with surgery to remove the nodule in April 2016. He has amazingly and gratefully been NED since then.

Ryan missed his senior year of high school due to treatment. He just graduated from the University of Delaware with a degree in biology with plans to go to medical school to pursue a career in medicine. He is currently working in the Schiffman Lab at the Huntsman Cancer Institute in Salt Lake City, Utah.

Ryan spoke at the Hyundai Hope on Wheels Mini Conference for osteosarcoma in 2018 and at FACTOR 2019. MIB Agents and the FACTOR Conference have had a profound effect on both Ryan and his mom and we both want to give back to Make It Better for other families affected by this devastating disease.