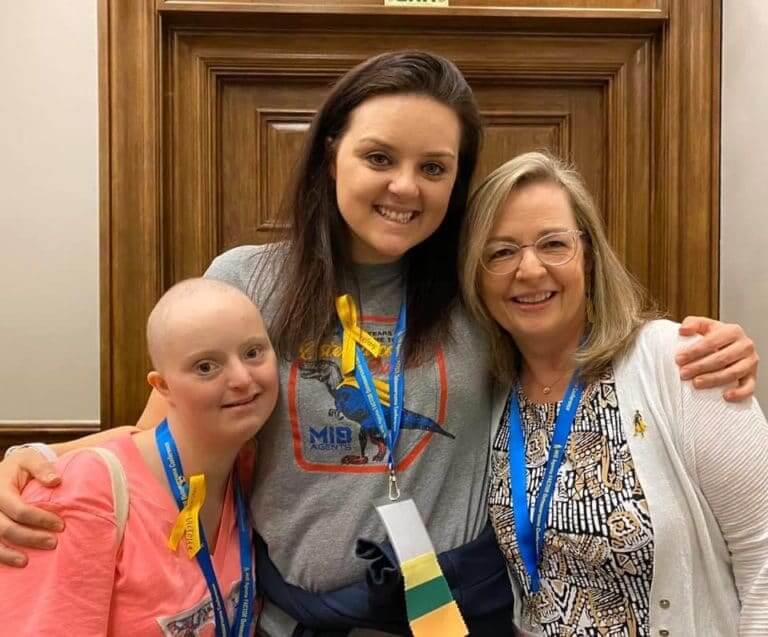 In 2008, I was 15-year old high school sophomore, who spent all my time playing competitive softball. I remember at the time I was experiencing constant knee pain, but thought it was because I had shattered my ankle a year prior. For six months, I continued to play softball in pain, but Easter Sunday I woke up with a huge lump on the side of my knee. My mom took me into urgent care the next day and the x ray showed a huge mass. I was immediately sent to Children’s hospital for tests and a biopsy and I got the confirmation of Osteosarcoma. I remember being terrified, scared, and uncertain what the future held for me. Everyone I had known had died from cancer. I was very fortunate to have a great support system and collectively
as a family we choose to fight.

Battling Osteosarcoma was rough for me, I struggled with many side effects, infections, and constant nausea. After going through nine months of this, I became cancer free, but my journey continued. I constantly struggled with additional complications and underwent multiple limb salvage surgeries. Finally, an infection was discovered, and the next steps were spent saving my leg. After two years of this, I could no longer take the pain and decided to make the difficult
choice to amputate. At eighteen, it was the hardest decision I have ever made, but it turned out to be the right one and I have never once looked back.

From this point on I was finally able to start actually living. I started checking things off my bucket list I created in chemo one by one. From skydiving, traveling around the US, completing a triathlon, to attending college 3,000 miles away in Boston, to also enjoying the little things in life like watching my younger siblings grow up and realizing how truly fortunate to wake up every day.

Spending countless hours in the hospital, I became close with the patients around me. It was here that I met some of the most incredible children, who never let illness stand in their way. I watched how cancer slowly and painfully took their lives and the impact it had on the people around them. These children greatly affected me and helped me realize my true calling in life to become a pediatric oncologist specializing in Osteosarcoma. I am currently on my way to achieving this dream and I am getting ready to start my second year of medical school at the University of Arizona Tucson. I love MIB and they are my second family. They have shown me how to use my voice to enact change and the importance of research, awareness, and how to use my power for good.