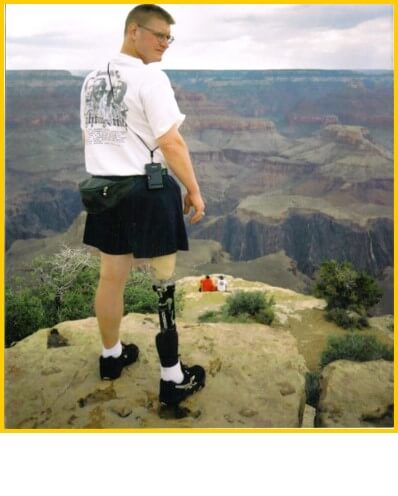 In 1989, I was diagnosed with metastatic osteosarcoma at the age of 15. I had surgery to remove my right tibia and reconstruct it with an osteoarticular allograft. This was performed by the late, great Henry J. Mankin, MD, one of my most treasured mentors. I also had surgery to remove the tumors from my lungs. While on post-operative chemotherapy, new lung tumors were discovered in my lungs which were also removed. Not having any other good options, I decided to participate in a Phase II clinical trial of MTP-PE at MD Anderson Cancer Center under the direction of Dr. Eugenie Kleinerman, another cherished mentor. This was successful and I have been in remission since 1990. Unfortunately, I had multiple recurrent orthopaedic complications and my right leg was amputated from above the knee in 1996 between my junior and senior years of undergraduate school at Notre Dame University.

From there I matriculated to Jefferson Medical College (now the Sidney Kimmel Medical College) where I took time off to perform research in Dr. Kleinerman’s Lab, and also a 1-year position in Dr. Lee Helman’s Lab at the NCI, thanks to the Howard Hughes Medical Institute. My son, Connor was born while my wife Laura and I were at NCI. After medical school I started Orthopaedic Surgery residency back home at the University of Pittsburgh and did another year of basic research, this time on osteosarcoma. I did my fellowship in Musculoskeletal Oncology at the University of Toronto with Jay Wunder, MD and Peter Ferguson, MD – also treasured mentors.

I started my first real job at Pitt in 2010 where I have been since. I am now an Associate Professor of Orthopaedic Surgery with joint appointments in Surgery and Pathology. I direct the Musculoskeletal Oncology Laboratory and serve as the Vice-Chair of Translational Research. I live in Pittsburgh with my wife Laura, kids Connor and Anna, and red labs Copper and Penny.

Dr. Weiss was a guest on OsteoBites, watch or listen to his session here.